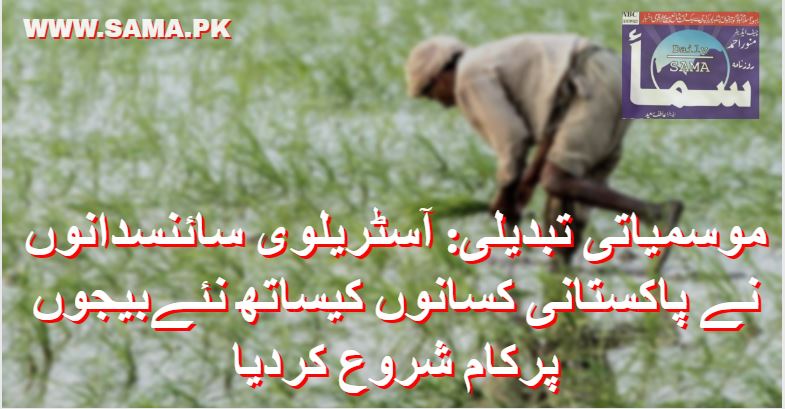 Australia’s High Commissioner in Islamabad, Neil Hawkins, was appointed to Pakistan about three months ago. Prior to that, he was Australia’s ambassador to Egypt, who also studied Arabic and Islam.

In a special interview on the occasion of GeoNews Islamabad visit, he said, the response of Pakistani institutions in the flood affected areas is great, but they need the overall support of the world. Work has also started with rival seeds, if the reconstruction phase comes, work should be done in such a way that disaster can be avoided even in case of heavy floods.

He said that this money will be spent through World Food Programme, we understand that Pakistan needs help and the world is also helping, Australia is also working with Pakistan on a long-term basis. Australian scientists are working with Pakistani farmers on several projects. A revelation of how plants can survive in salt water in Punjab and Sindh.

According to Neil Hawkins, Australia knows well about floods and droughts, we show real brotherhood with Pakistanis, we can learn from this disaster in Pakistan, what happened here, can help Pakistan to avoid such disasters in future, so we will have. More experienced workforce to work on climate change, agriculture and food security.

In response to a question, the Australian High Commissioner said, “I am very impressed with Benazir’s Income Support Program, which transfers money to the needy in a short period of time. I think it is a great example for the world.”

ThePipaNews 10-year plan to generate cheap power sent to Nepraco for approval - Photo: File It has been decided to close the 7339 MW...
Read more
Business

ThePipaNews At the start of the business week, the dollar fell by Rs 2.65 to Rs 237 at the interbank level. Pakistan Stock Exchange is...
Read more
Business

ThePipaNews The Indian currency is currently in a continuous decline and today one dollar touched a 22-year high of 81.30 INR. The value of...
Read more
Business

ThePipaNews Image: FileThe dollar also went into reverse gear due to the return of Ishaq Dar, the price of the dollar fell by 6...
Read more
Business

ThePipaNews The Pakistan Stock Exchange continued its positive trading trend while the Pakistani rupee saw a big rise against the US dollar. The dollar...
Read more

ThePipaNews Mumbai: The dispute over the Vedanta-Foxconn project, which has been a source of friction between the ruling party and the opposition in the...
Read more