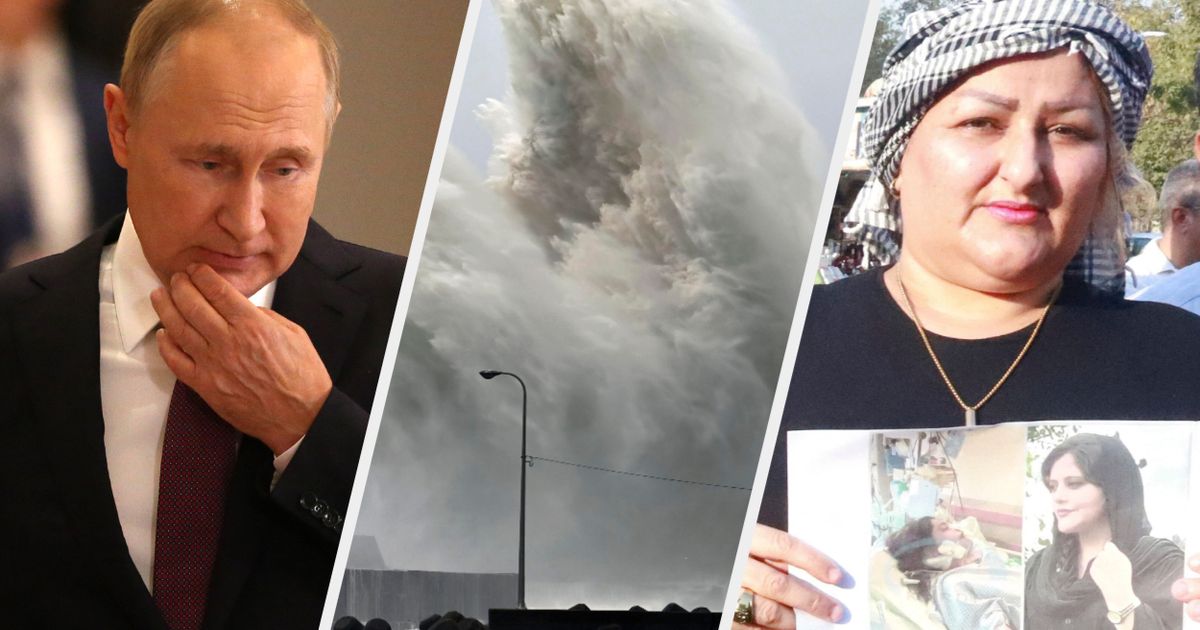 The Queen’s death marked the end of an era for many in Britain, but it didn’t mean life stopped for the world.

While some stories – such as the death of Chris Kaba, the ongoing cost of living crisis and Liz Truss’s new cabinet – got a look, the state funeral meant others slipped off the agenda.

So as the country emerges from this period of national mourning, here’s a list of important news you may have missed entirely over the past 11 days.

Leicester is known for its multicultural population, but a spate of clashes in recent weeks has shaken the city to its core.

Violence first erupted after the India v Pakistan cricket match a month ago on Sunday, August 28, and more fights followed over the next few weeks.

But locals claim tensions began to rise long before the match, with members of both the local Hindu and Muslim communities allegedly pitted against each other, although the exact cause remains unclear.

Tensions appeared to come to a head on the night of September 17, when around 200 people – mainly masked or hooded men – gathered for unauthorized protests in the eastern part of the city.

All available local police were called to the scene, and a standoff ensued, with police having to separate rival groups as they threw bottles at each other.

Police were even diverted from the Queen’s funeral in London to back up the force in Leicestershire. They arrested a total of 47 and 16 police officers were injured in the violence on Saturday night alone.

Claudia Webb, Independent MP for Leicester East, said tensions had been simmering for “months” and has previously claimed that some social media accounts are “playing on this concern” by “spreading misinformation”.

In a post on Twitter, she wrote: “There are reports of incitement to hate targeting Muslim and Hindu faith homes, shared on social media to create fear.

“Places like Facebook and via WhatsApp designed to ‘capture’ members of the local community to participate in a protest, fueled by hatred.”

She claimed that such posts were “designed to provoke further clashes and to cause disharmony and mistrust”.

This weekend we have seen unacceptable hate-driven violence.

Ours is a community of deep faith. Our unique cultural diversity is our strength.

Right-wing fascism and toxic extremism have no place in a civil society. Our communities in Leicester stand united against it.

Mayor of Leicester Sir Peter Soulsby has said recent events have left him “bewildered”, while Labor MP for Leicester South Jonathan Ashworth said the troubles were a “dark episode” in which he and residents are “rightly proud to celebrate our diversity”.

Extremism, territorial rivalries and the influence of people outside the city have all been blamed for inciting violence.

Webb also warned on Tuesday that the violence could spread beyond Leicester without central government intervention.

The Hindu and Muslim communities in Leicester released a joint statement two days after the weekend violence, saying: “We come from one family. We settled here in this city together, we fought the racists together, we are building it together . The latest violence is not who we are as a city.”

The Indian government has also released a statement strongly condemning the violence.

“We have strongly raised this matter with the UK authorities and have sought immediate action against those involved in these attacks.”

Protests have erupted across Iran’s capital Tehran after Mahsa Amini, a 22-year-old woman, was killed on Friday.

She had been in a coma for three days after “morality” police detained her for violating hijab rules. She was detained outside a metro station in Tehran, as part of a police crackdown on clothing.

Witnesses said officers beat her inside a police car which later took her to a detention centre, although police Brigadier General Hossein Rahimi dismissed such claims as “cowardly accusations”.

Police also claimed that Amini had suffered “sudden heart failure” while at the detention center where she was to be “trained” along with other women.

Mahsa Amini, 22-year-old Iranian woman has died after being severely beaten by Iran’s “morality” police for improper veiling. Meanwhile, Iran with its notorious brand of gender apartheid was elected in 2021 by the United Nations to its Commission on Women’s Rights.#MahsaAmini #مهساامینی pic.twitter.com/nVqZC7xngW

Authorities later released footage showing a woman they say is Amini talking to a female officer, who had tried to reach for her clothes. Amini then holds her head with her hands and falls to the floor.

Police, who described her death as “unfortunate”, said Amini had “previous physical problems”, but her father denied such a claim, claiming that the CCTV footage is edited.

In protest against Amini’s death and Iran’s strict regime, women have since been seen removing their headscarves and cutting their hair while shouting “death to the dictator”, in what is believed to be a reference to the country’s supreme leader, Ayatollah Ali Khamenei.

Demonstrations in Tehran and western Iran over the weekend reportedly led to the death of two people during a clash with riot police.

Protests in Saqez, a western part of Iran, led to security forces allegedly opening fire on a crowd as it tried to move towards the local governor’s office.

Waving in headscarves #Irans protests are a brave act of defiance by women fed up with 44 years of oppression and abuse. Today they lead the protests. I have heard that many mothers joined their daughters today to scream their anger and say: enough is enough… #Mahsa_Amini pic.twitter.com/EddK4gnU0F

A devastating storm, Hurricane Fiona, has swept across parts of the Caribbean in recent weeks – and it doesn’t look like it’s slowing down anytime soon.

Residents of the Turks and Caicos Islands were urged to seek shelter on Tuesday, after Fiona had already wreaked havoc in Puerto Rico and the Dominican Republic. The hurricane is expected to reach the southern Bahamas as well, and the eastern Bahamas on Wednesday.

In Puerto Rico, the storm killed at least three people and caused significant flooding with more than 75 cm of rain.

It also caused a total blackout that isn’t expected to be fixed anytime soon, especially as the territory is still struggling with its power grid after the brutal Category 5 storm, Hurricane Maria, which knocked out 80% of power lines in 2017.

The weather in the US territory remained chaotic on Monday, with frequent lightning and rain. Torrential rain and wind then also hit the Dominican Republic, and it now appears to be building in power.

The Category 2 storm is expected to become a Category 3 with winds above 111 mph, making it the first “major hurricane” of the 2022 season, according to the National Hurricane Centre. By the time it reaches the eastern Bahamas, it could be a Category 4.

At least two people were killed as record winds and rain battered western Japan on Monday.

Prime Minister Fumio Kishida even delayed his flight to New York for the UN General Assembly so he could look at the damage from the 14th typhoon Japan has suffered this season.

It made a major landfall near the city of Kagoshima on Sunday, before hitting the islands of Kyusha and Honshu, as rivers overflowed and roofs were ripped off by the strong winds.

“We need to be very alert for heavy rains, storms, high waves and storm surges,” an official from the Japan Meteorological Agency said, according to the Reuters news agency. At least 115 people have been reported injured and around 340,000 households have lost power.

5. Putin moves submarines away from Crimea – but nuclear fears continue

Russian President Vladimir Putin has reportedly moved the country’s submarines away from the annexed peninsula of Crimea.

Since Crimea was seized by Russia in 2014 (and seen by some as the start of Russia’s war on Ukraine), it was considered secure under Moscow’s rule.

But as Britain’s defense secretary tweeted on Tuesday, Russia’s Black Sea Fleet has “almost certainly moved” its submarines from Crimea to southern Russia.

The officials explained: “This is most likely due to the recent change in the local security threat level in the face of the increased Ukrainian long-range strike capability. In the last two months, the naval headquarters and its main naval airfield have been attacked.

“Ensuring the Black Sea Fleet’s basing in Crimea was likely one of Russian President Vladimir Putin’s motives for annexing the peninsula in 2014. Base security has now been directly undermined by Russia’s continued aggression against Ukraine.”

It comes after Ukraine’s highly successful counteroffensive that has retaken large parts of the country from Russia in the northeast.

– The occupiers are clearly in a panic, Ukrainian President Volodymyr Zelenskyy claimed on Monday.

This is separate from the concerns surrounding the Zaporizhzhia power plant, which is on the front line of the struggle between Ukraine and Russia.

The facility in southern Ukraine is far from the front line, but the attack shows the extent of Russia’s reach (if it really came from Moscow).

Nevertheless, there was no damage to the safety equipment, and the exact source of the explosion could not be independently confirmed.

On the anniversary of two other significant earthquakes, dating back to 1985 and 2017, Mexico was hit by another earthquake that killed at least two people.

The National Autonomous University of Mexico said there is no scientific explanation why all three quakes would occur on the same day.

Hospitals were damaged and other buildings collapsed onto the people inside.

The US Pacific Tsunami Warning Center also issued a warning for coastal areas, saying waves reaching up to three meters above tide level were possible.

Michel Laprise on the Royal Albert Hall and Madonna ThePipaNews