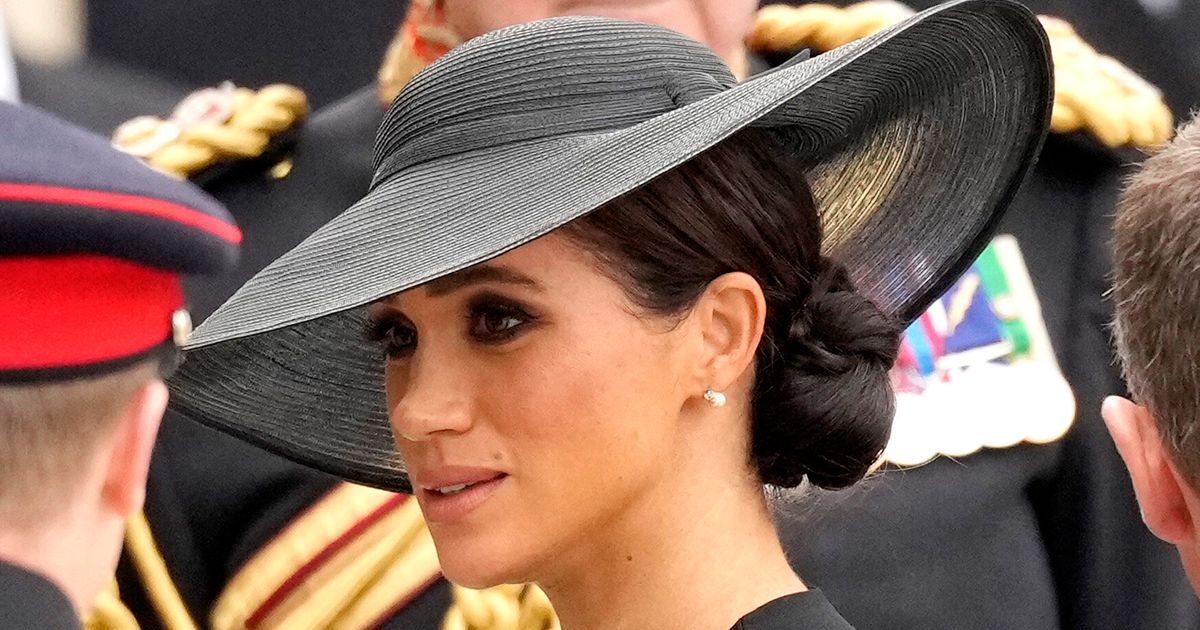 Meghan Markle, Duchess of Sussex, paid tribute to Queen Elizabeth at the monarch’s state funeral on Monday by wearing earrings the Queen gave her as a gift.

People magazine reported that the Queen gave the Duchess pearl and diamond earrings in 2018 for their first solo outing.

Meghan also wore the earrings last week as the royal family carried out a procession following the Queen’s coffin from Buckingham Palace to Westminster Hall.

Kate Middleton and Princess Charlotte similarly honored the Queen through the meaningful jewelry they wore at the funeral.

The Princess of Wales wore a four-row Japanese pearl choker, paired with Bahraini pearl earrings. Both pieces belonged to the late queen.

The pearls are of great significance, as they were a favorite of the late monarch and are also a symbol of mourning.

Lauren Kiehna, writer and editor of The Court Jeweller, noted on Monday that Princess Charlotte wore her first “significant” piece of jewelry at the Queen’s funeral.

Charlotte wore a diamond horseshoe brooch to honor her great-grandmother’s love of horses, Keihna pointed out.

Observers also noted the dress code at the state funeral on Monday, including Prince Harry in a morning suit. He was not allowed to wear his military uniform at funerals, as he is no longer a royal employee.

The Duke of Sussex was granted an exemption to wear his uniform during a vigil over the Queen’s casket on Saturday, along with his brother, Prince William, and the Queen’s six other grandchildren. The exemption was not made at Harry’s request, sources confirmed to HuffPost.

“Prince Harry, Duke of Sussex will be wearing a morning suit during events honoring his grandmother,” a spokesperson for the duke confirmed to HuffPost on Tuesday.

“His decade of military service is not determined by the uniform he wears and we respectfully ask that the focus be on the life and legacy of Her Majesty Queen Elizabeth II,” the spokesman added.

Prince Andrew, who was stripped of his royal patronage and military titles – though for very different reasons – also wore morning dress on Monday.

He was also given an exemption to wear a military uniform when he stood vigil with his siblings on Friday.

The Duke of Sussex stands next to King Charles III, Princess Anne and Prince William as they greet.

Yeoman of the Guard at Westminster Abbey ahead of Queen Elizabeth II’s state funeral.

The Coldstream Guards ahead of the state funeral of Queen Elizabeth II on 19 September.

A marching band performs before the funeral service for Queen Elizabeth II.

Children look at flower arrangements outside Windsor Castle as they wait for the coffin of Queen Elizabeth II to arrive on September 19, 2022 in Windsor, England. The service at St George’s Chapel, Windsor Castle, will take place after the state funeral at Westminster Abbey.

Catherine, Princess of Wales, Camilla, Queen Consort and Prince George of Wales are seen on The Mall ahead of the state funeral.

The Princess of Wales, Princess Charlotte and Prince George arrive.

Prince William and Prince Harry walked side by side in Queen Elizabeth’s funeral procession to Westminster Abbey, along with their cousin, Peter Phillips.

The Prince and Princess of Wales, Prince George of Wales, Peter Phillips and Zara and Mike Tindall attend the state funeral.

The Princess of Wales, Duchess of Sussex, Prince George and Princess Charlotte arrive at the funeral.

The Prince of Wales follows Queen Elizabeth II’s coffin, draped in a royal standard and adorned with the Imperial State Crown and the sovereign’s orb and sceptre.

The Queen’s funeral cortege is carried on the Royal Navy State Gun Carriage traveling along The Mall.

LONDON, ENGLAND – SEPTEMBER 19: Prince William, Prince of Wales and Prince Harry, Duke of Sussex during the state funeral of Queen Elizabeth II at Westminster Abbey on September 19, 2022 in London, England. Elizabeth Alexandra Mary Windsor was born in Bruton Street, Mayfair, London on 21 April 1926. She married Prince Philip in 1947 and ascended the throne of Great Britain and the Commonwealth on 6 February 1952 after the death of her father, King George VI. Queen Elizabeth II died at Balmoral Castle in Scotland on 8 September 2022 and was succeeded by her eldest son, King Charles III. (Photo by Samir Hussein/WireImage)

The Pipa News Photo courtesy of Foreign MediaNeighboring Iran has started construction of a new nuclear power plant in Khuzestan province.According to a foreign...
Read more

Polo is a great sport, young players will get all possible facilities Parvez Elahi ThePipaNews

The Pipa News Polo is a great game, young players will get all the amenities, Parvez Elahi Lahore (Daily...
Read more

The Pipa News Airport Security Force (ASF) personnel were en route to Sharjah while carrying out operations at Karachi Airport More than 2 kg of...
Read more

The Pipa News Photo: FileRussia rejected the actions of European countries aimed at limiting the price of Russian oil.After the European Union, the G7...
Read more

The Pipa News Officials acknowledged that 200 people, including security forces, have been killed in ongoing protests in Iran, and President Ibrahim Raisi...
Read more

After the world market, the price of gold in Pakistan also fell slightly ThePipaNews

The Pipa News After a decline in the global market, the price of gold also fell in Pakistan.
Read more
Load more