Boris Johnson is on a farewell tour to highlight his achievements – no, seriously ThePipaNews 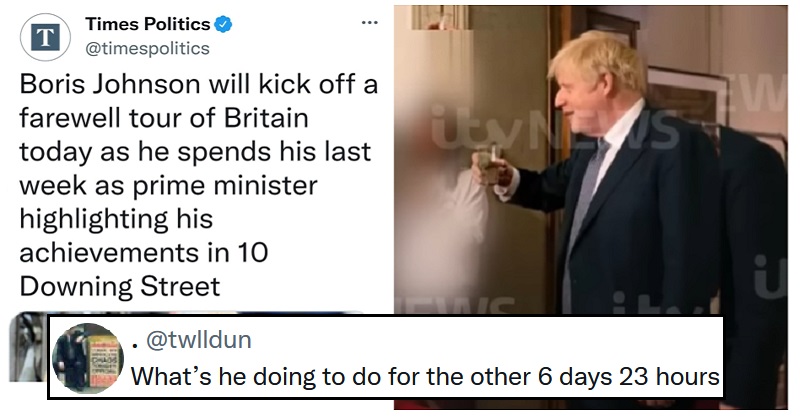 On July 7, Boris Johnson stood in front of the famous door of 10 Downing Street and addressed the nation with these words –

“I want you to know that from now until the new prime minister is in place, your interests will be served and the government of the country will continue.”

He then proceeded to go on holiday twice, cosplay as a soldier, fly in a fighter jet, have two big parties and refused to make any decisions or take any action, because that would be the job of the next prime minister.

It was less the behavior of a prime minister in a crisis than a ten-year-old’s wish list.

BREAKING: Boris Johnson has declared that he is unfortunately unable to take any further action on the energy crisis as it would disrupt his holiday in Greece x

What did the government do? Either campaigning to be the next prime minister, or talking about why they backed the horse they did in that particular race.

Now, as the countdown to the new Prime Minister – Liz Truss …it will be Liz Truss – reaches its final days, Boris Johnson has embarked on a ‘farewell tour’ to promote and celebrate his legacy.

Boris Johnson will start a farewell tour of the UK today as he spends his final week as Prime Minister highlighting his achievements at 10 Downing Street https://t.co/NJnXoV9SJn

Boris Johnson’s national tour – the criminal always returns to the scene of the crime.

Just off on a tour of the country to highlight my achievements oh I’m already back.

What will he do the other 6 days 23 hours https://t.co/3aSMbKKfya

There is literally no end to his vanity. The cost of living is spiraling out of control and he wants a lap of honor with people patting him like seals. https://t.co/xXJEEQOwtK

BREAKING: Boris Johnson plans to go on week-long UK tour to ‘cement his legacy’. It is still unclear if he will visit all the beaches he has trashed to paddle x

ThePipaNews The 'Glasgow Illuminated' experience in George Square will not return for 2022, it has been revealed. ...
Read more
World

ThePipaNews A man was left bleeding profusely and with "significant" facial injuries after being robbed Wednesday afternoon in Burlington, Vermont, according to the city's...
Read more
World

ThePipaNews SOMETIMES a man will find himself gently nudged in the right direction on a matter. Here, Steve Malley explains how to bloody...
Read more
World

ThePipaNews These helpful tips can help you build a long-distance relationshipExpert tips from thortful have revealed the secret to maintaining relationships with your long-distance...
Read more

Pune Local News, Pune : Preparation for competitive exams; But she broke down on the spot in her studies, and… – Student preparing...